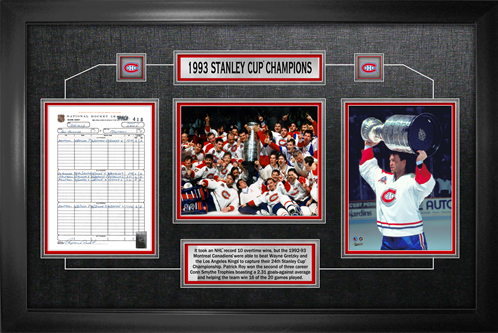 This commemorative 1992-93 Stanley Cup frame showcases two 8x10" photos, and an exact NHL licensed replica copy of the scoresheet from the final game in 1993. The descriptive metal plate at the bottom of the frame recaps the glory of the championship and reads the following: "It took an NHL record 10 overtime wins, but the 1992-93 Montreal Canadiens' were able to beat Wayne Gretzky and the Los Angeles Kings' to captuire their 24th Stanley Cup. Patrick Roy won his second of thre Conn Smythe Trophies boasting a 2.31 goals-against average and helping the team win 16 of the 20 games played. The frame is accompanied by a Frameworth Certificate of Authenticity that states the product is officially licensed through the NHL & HHOF and includes a replica of the actual score sheet from the 1992-93 playoffs." The finished frame size is 25"x36"x1". Our new line of historic scoresheet collectibles is being offered through The Shopping Channel for the first time ever. The frames are a part of a four frame collection that showcases all of the most recent Stanley Cup victories for Canadian NHL franchises. SOLD OUT