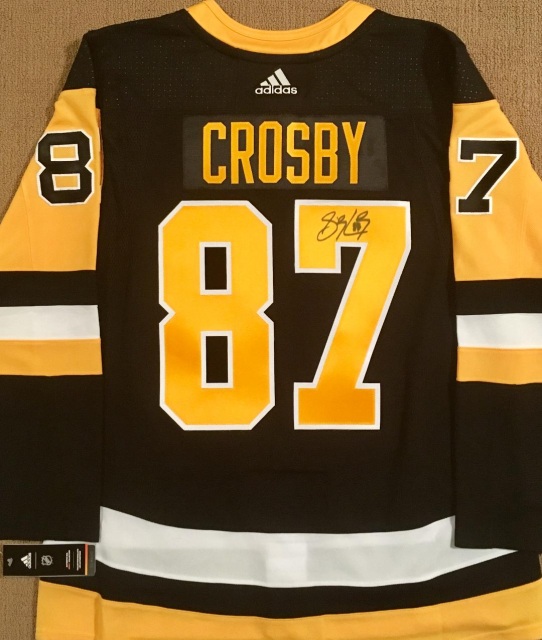 Hand signed Pittsburgh Penguins Adidas authentic pro black jersey by Sidney Crosby with a sharpie. Mint condition with original factory tags, all numbers and letters are professionally hand-sewn on the jersey which is beautifully signed on the back. Signed number donated by the Pittsburgh Penguins for the 2019 ESSO Cup. Authentic Adidas jersey and pro stitch sewing from Pro Am Sports Excellence. Nicknamed ‘Sid the Kid’ and dubbed ‘The Next One’, Crosby was selected first overall by the Penguins in the 2005 NHL Entry Draft, and is widely regarded as one of the greatest hockey players of all time. Crosby became the youngest captain in NHL history to win the Stanley Cup in 2009 and led Pittsburgh to Stanley Cup championships in 2016 and 2017, becoming the third player to win the Conn Smythe Trophy (playoff MVP) in consecutive years.